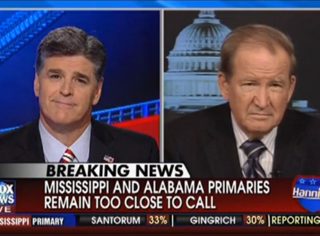 Since leaving MSNBC, Pat Buchanan has made few appearances, some on Fox News, but many on the dangers of censorship of the airwaves. He made such an appearance tonight with Sean Hannity, warning that using language to “blacklist, stifle, and silence conservatives” was the left’s mission and the “inquisition” was dangerous for dialogue.

“You’ve got the other side doing some pretty nasty and horrible things,” Buchanan remarked in response to things said by conservative public enemy #1 Bill Maher, noting that there was certain “language was captured by the left and they now control it,” words that the left uses to “blacklist, stifle, and silence conservatives.” While Buchanan noted that it was natural for “every establishment [to] enforce its own morality, its own code, and its own culture,” the political correctness functions to “set up an inquisition.” While the First Amendment protects people, “they can take away that microphone that you sit at at home or take you away from the camera so that people can’t hear you.”

As for Maher, to Buchanan, he was the perfect example of the double-standard that proves what side the media is on. “Bill Maher uses as stock and trade terms for women that Rush Limbaugh made a mistake in using,” he pointed out, meaning the media sent out the message that “we cut slack for people that commit atrocities because the people they committed atrocities against are people we despise, we loathe.”

“I prefer the old Crossfire days, Pat,” Hannity lamented at all the censorship, smiling.