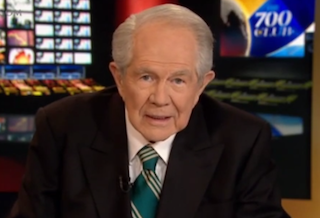 Televangelist Pat Robertson may have admitted that it’s “nonsense” to think the Earth is only 6,000 years old, but the climate change debate is another story altogether. On The 700 Club Tuesday, used the now-classic “but it’s cold outside” defense to explain why he believes it’s “idiocy” to believe that the planet is getting warmer.

Robertson was reacting to recent comments by Secretary of State John Kerry, who compared climate change to the proliferation of weapons of mass destruction and other major threats the planet will face in the coming years. “I don’t know where Kerry has been spending his time,” the host said, “but maybe he’s so wealthy they have a special house that has tropical plants in it so he feels like he’s in the tropics, but for the rest of us, it’s been cold as the Dickens!”

“It’s idiocy and they’re laughing at people who go outside and it’s freezing!” Robertson continued, before listing ambiguous records that have been broken this winter and all the flights that have been canceled due to snow. Kerry’s “agenda,” according to Robertson, is to “take control of industry” in America and give “one more victory” to the “socialists.”

RELATED: Gingrich Calls on ‘Delusional’ Kerry to Resign: ‘Dangerous to Our Safety’

For anyone like Robertson who’s confused about the difference between climate and the weather, Bill Nye “the Science Guy” gave a clear and concise explanation on Real Time with Bill Maher this past Friday. “Climate is the big picture, weather is day-to-day,” Nye told Bill Maher. In other words, the climate can be heating up, but it can still be “cold as the Dickens” outside.