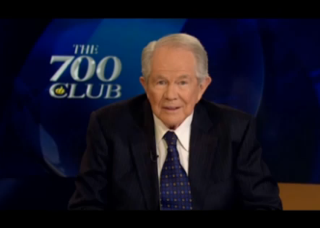 It has been a while since religious personality and serial end-of-the-world predictor Pat Robertson warned that God would smite America over things he didn’t like– since last January, from our records. This week, Robertson’s fear that America will be destroyed has been stirred by New York legalizing same-sex unions. On the 700 Club this week, Robertson reminded his audience that the last city known for homosexuality, Sodom, had residents willing to rape visiting angels.

“We need to remember the term sodomy came from a town that was known as Sodom, and Sodom was destroyed by God Almighty,” Robertson noted by way of explanation. Sodom’s sin, he noted, was “homosexual activity,” apparently a gateway drug to “tr[ying] to rape angels that came down there.” Robertson, to his credit (?), does note that the New Testament doesn’t really say anything about homosexuality in relation to Sodom’s destruction: “when [Jesus] spoke of Sodom, he didn’t say anything about the homosexuality. He talked about just the fact that business was as usual until God decided to destroy it.”

Despite ceding what appears to be a major point in that Jesus himself didn’t say anything about homosexuality regarding the destruction of this city, Robertson didn’t stop in making the analogy: “we’re heading that way as a nation.” Yes, statistically, Robertson argues we have little to no time left is America embraces alternative sexualities as naturally occurring and not heinous choices to engage in ungodly hedonism. “In history there’s never been a civilization, ever in history, that has embraced homosexuality and turned away from traditional fidelity, traditional marriage, traditional child-rearing and has survived.” The latter seems to require a bit of explanation– haven’t humans not been able to non-traditionally child-rear via artificial insemination for too short of a time in their history to really come to a conclusion on that one yet?– and the link between homosexuality and, say, “traditional fidelity” seems tenuous, at best.

In any case, Robertson concludes that “the same thing [as Sodom] is going to happen to us” should America continue on this path, because “we’re not exactly setting us up for His favor.”

The segment from The 700 Club below: