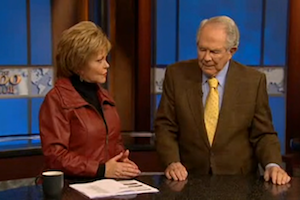 Pat Robertson more commonly garners media attention for blaming various things he doesn’t like on things that have little or nothing to do with them (e.g. the Haitian earthquake on the nation’s supposed pact with Satan, or the September 11th attacks on the ACLU and “the gays”). Yet this week he’s making headlines for comments that sound a lot less Pat Robertson and a lot more Cheech and Chong. Apparently, Pat Robertson supports decriminalizing marijuana.

Opening a segment on faith-based prison rehabilitation on his show The 700 Club this week, Robertson noted that many conservatives look at drug addicts and “think ‘lock ’em up, throw away the key,’ after which he played a segment highlighting how religious influence could help rehabilitate criminals that regularly end up behind bars. “We’re probably spending more on prisons than on education,” the segment notes, and argues that, given the “50% failure rate” of the prison system (a statistic based on one claiming that 50% of all prisoners end up committing a second crime), it’s time for a change in the way prisoners are handled, this time with less “secular” appeal and with more of a biblical approach.

At the end of the segment, Robertson rails against conservative politicians who he says run on a “tough on crime” philosophy that wins votes but is ultimately “not the answer.” Beyond putting criminals behind bars, he argues, “we’ve got to take a look at what we’re considering crimes”:

“I’m not exactly for the use of drugs, don’t get me wrong, but I just believe that criminalizing marijuana, criminalizing the possession of a few ounces of pot, that kinda thing it’s just, it’s costing us a fortune and it’s ruining young people. Young people go into prisons, they go in as youths and come out as hardened criminals. That’s not a good thing.”

So Pat Robertson is not about to blast some Bob Marley and pass a joint around the 700 Club set anytime soon, but for such a hardened conservative to contemplate the idea that it is the prison system creating criminals over these minor crimes– rather than the criminals, as he argues conservatives sometimes think, being born that way– is perhaps the most shocking (or at least unexpected) comment Pat Robertson could make.

The segment from The 700 Club below:

Update: Since we initially posted the story, CBN Spokesman Chris Roslan vehemently denounced the idea that Robertson called for the decriminalization of marijuana in the following press statement:

Dr. Robertson did not call for the decriminalization of marijuana. He was advocating that our government revisit the severity of the existing laws because mandatory drug sentences do harm to many young people who go to prison and come out as hardened criminals. He was also pointing out that these mandatory sentences needlessly cost our government millions of dollars when there are better approaches available. Dr. Robertson’s comments followed a CBN News story about a group of conservatives who have proven that faith-based rehabilitation for criminals has resulted in lower repeat offenders and saved the government millions of dollars. Dr. Robertson unequivocally stated that he is against the use of illegal drugs.

What to make of this correction, which erroneously claims media outlets reported Robertson’s comments as an endorsement of drug use? Well, on one hand, Robertson’s words stand: “I just believe that criminalizing marijuana, criminalizing the possession of a few ounces of pot, that kinda thing it’s just, it’s costing us a fortune and it’s ruining young people.” The subsequent press statement clarifies that the aforementioned comment does not mean, however, that Robertson supports the decriminalization of marijuana. Skeptics and smart alecs will quip that Robertson considers “ruining young people” a positive outcome, though more likely than not these words were the product of a mind still grappling with this controversial issue and even Robertson himself has likely not had the time to come to a concrete conclusion. It will be fascinating to see if Robertson shares his own internal monologue with his audience, and if, ultimately, he sticks to a faith-based, and not government-based, solution to the war on drugs.