Pat Robertson: GOP Base Is Becoming Too Extreme 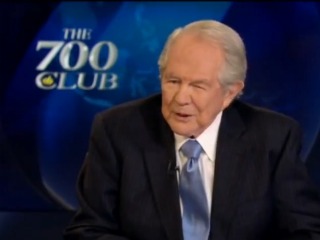 Televangelist and mogul Pat Robertson — a man whose name is practically synonymous with the Religious Right — likely took 700 Club viewers by surprise today when he opined that the Republican base is losing support by “pushing” what he described as “an extreme position.”

Robertson expressed worry that Republican front runners are going to alienate voters during the general election by catering to a narrow base:

I believe it was Lyndon Johnson that said, “I doubt these people realize if they push me over to an extreme position that I’ll lose the election. And I’m the one who will be supporting what they want, but they’re going to make it so I can’t win.”

Those people in the Republican primary have got to lay off of this stuff. They’re forcing their leaders, the front runners, into positions that will mean they lose the general election. Now whether this did it to Cain, I don’t know, but nevertheless, you know, you appeal to the narrow base and they’ll applaud the daylights out of what you’re saying, and then you hit the general election and they say “no way” and then the Democrat, whoever it is, is going to just play these statements to the hilt. They’ve got to stop this! It’s just so counterproductive!

Well. If they want to lose, this is the game for losers.

As Right Wing Watch notes, Robertson’s statement came on the heels of a discussion about recent poll favorite Herman Cain‘s shifting views on how the government should approach the issue of abortion.

Now. How long until people take a look at this opinion — made by a man who obviously is deeply integrated in and, we may assume, has a deep commitment to the Republican party — and declare him a “RINO,” further proving his point?

Have a listen to Robertson’s assessment: