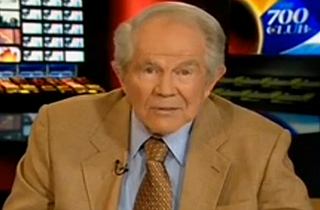 During his 700 Club broadcast this morning, televangelist Pat Robertson warned that the Supreme Court striking down the Defense of Marriage Act will lead the United States to a fate similar to the biblical cities of Sodom and Gomorrah, which were destroyed by God in the Book of Genesis for their sinful and inhospitable behavior.

“The defenders of traditional lifestyle and biblical values are going to be marginalized very quickly,” said of the Supreme Court’s decision to overturn a 1996 federal law that allows states to refuse to recognize the same-sex marriages permitted by other states.

In response to the news, Robertson mocked the suggestion that the battle for same-sex marriage has any similarities to the civil rights struggle during the 1950s and ’60s. Ultimately, the televangelist concluded, Americans’ “liberties are in danger” as governments continue to expand same-sex marriage, abortion rights, and the “removal of the Bible from schools.”

“Read the bible,” he warned his audience, “because Sodom and Gomorrah, that’s where the term comes from, sodomy. Look what happened to Sodom. After a while, there wasn’t any other way, so God did something pretty drastic.”

Robertson, of course, was referring to a portion of the Book of Genesis in which God warns righteous residents of the city to flee because he intended to destroy it with fire and brimstone for its aberrant behavior. This particular story has often been used by evangelical Christians in their fight against same-sex marriage, often suggesting that the “immoral” sodomy performed by homosexuals will eventually lead to the destruction of civilization.

Watch below, as clipped by MMfA: