Pat Robertson: We Need To Jail The Bankers Who Caused The Financial Crisis
video

Pat Robertson: We Need To Jail The Bankers Who Caused The Financial Crisis 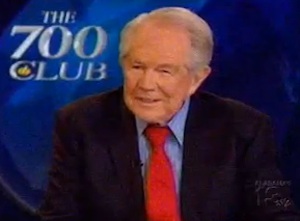 On The 700 Club this week, Pat Robertson discussed the banking crisis and glowingly spoke about how Iceland jailed many of the bankers who devastated their nation’s economy by taking out fraudulent loans. Robertson hailed the Nordic nation for its actions and said that Americans should deal with the financial crisis in the same way. “Guess what country is getting itself out of a financial problem by some draconian measures?” Robertson asked his co-host Terry Meeuwsen. “Greece?” she asked. “No, not even close. Iceland!” Robertson exclaimed. “They are putting people in jail. Prime ministers are being indicted. They are going after banks. The people said the banks are ripping us off. We don’t like what they did, and they brought our country to ruin. Suddenly, Iceland is turning around and they look like a big success story!”

“Think we could learn something?” Meeuwsen asked.

“We sure could!” Roberson continued. “We could start putting all of those bankers in jail. There was not one banker prosecuted and so many people were lying, and so-called “no-doc loans” and liars’ loans, and none of them have been held accountable. I’m not for putting people in jail. I’m sick of these — we’ve got too many penalties. Too many penalties, too many criminal sanctions, too many people in prison. But here is an opportunity for the people who wanted, you know, to enforce laws, to enforce that one. There must be some laws against lying on documents. I’m sure there are.”

“Lying to banks is a super no-no,” he added. “It has criminal sanctions, but nobody so far has had to pay the price, but Iceland is leading the way and their GDP is growing, and all of a sudden, they were in a terrible mess, terrible mess, and look what is happening!”

Watch the segment below via CBN: