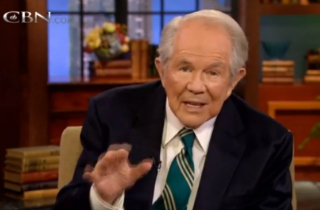 You may want to pray over that new army coat you bought from your local thrift. It might have demons lurking within.

Or so says televangelist Pat Robertson.

On his 700 Club show this week, Robertson answered a viewer email that asked whether to follow a mother’s recommendation to pray over secondhand clothing items in order to shoo away any demonic spirits living within.

Robertson took the opportunity to relay a story he once heard: “There was a witch who had prayed over a particular ring and asked for a spirit to come into it,” he recounted. “Well this Philippine girl was so attached to this ring, she had to buy it. She bought it and all Hell broke loose because she finally recognized what it was.”

“Can demonic spirits attach themselves to inanimate objects, the answer is yes,” he asserted. 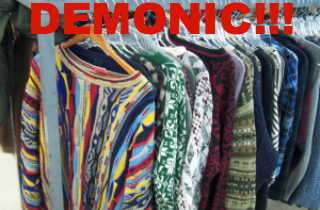 Robertson then admitted that not every sweater from Goodwill has demons nested up inside it, but “it ain’t going to hurt anything to rebuke any spirits that happened to have attached themselves to those clothes.”

All good information to know next time you buy an ugly sweater or funky pants from the local thrift store. It’s no wonder my dog died three weeks after I bought a used “Three Wolf Moon” tee from my local Salvation Army. Clearly the devil’s work.

Robertson’s revelation also solves the mystery as to why indie rapper Macklemore‘s song “Thrift Shop” is so immensely catchy: It’s THE DEVIL’S PROPAGANDA!