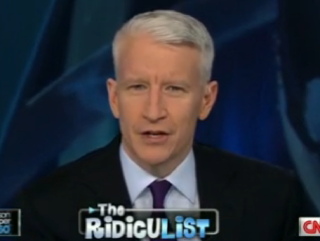 Earlier in the week came the earth-shattering (or at least childhood-confusing) revelation that game show hero Pat Sajak and beloved American icon Vanna White would knock back a ton of margaritas before doing the show and more or less forget what the alphabet is. It so struck Anderson Cooper, who admitted to loving the show, that he put Sajak on the Ridiculist on Friday for the admission– and for claiming that the 1980s Wheel of Fortune “shopping” segment was “boring.”

RELATED: Pat Sajak Admits To Hosting Wheel Of Fortune Drunk Back In The Day

Sajak’s confession came from an inexplicable interview with inexplicably existent show Dan Le Batard is Highly Questionable, a program on ESPN2– so, ostensibly a sports show?– where host Dan Le Batard and his loud and hilarious Cuban dad talking about literally anything (for example, here they are discussing the acceptability of men with earrings, and here is Dad salsa dancing for no reason). It is arguably the best thing on television. But I digress: on this program, Pat Sajak felt comfortable enough to discuss his outings to “Los Arcos,” a local Mexican restaurant that made great margaritas, in between tapings of the show. Cooper took the interview bit by bit, starting with Sajak’s claim that the segment where the winners use the money they won to “buy” prizes was the most boring bit of television of its time. “I’ve got to stop him right there because I beg to differ,” Cooper objected, “that part, where they chose the prizes, that was TV gold.”

He then got to the part where Sajak admits to his inebriation. “I need to buy a vowel because OMG,” he commented, playing a clip of Sajak and White from back in the day and stating incredulously, “there’s no way Vanna could twirl like that and turn all the letters if she were tanked on tequila.” He ends with the suggestion that they may have exaggerated, and that Sajak claims to be “too old now to even entertain such an idea.”