Pataki on Huckabee’s Trans Comments: We Should Show Respect Instead of Mockery
video

Pataki on Huckabee’s Trans Comments: We Should Show Respect Instead of Mockery 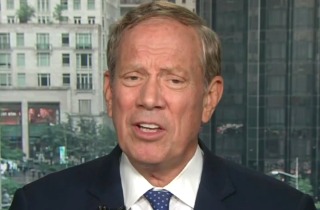 In reacting to recent comments by Mike Huckabee about transgender individuals, GOP candidate George Pataki said everyone should be showing respect for people who make those choices, not mockery.

Huckabee made the comments months ago, but they’ve received lots of attention today because, thanks to Caitlyn Jenner, trans issues are back in the news. Huckabee joked about identifying himself as female in high school so that he could shower with the girls in the locker room.

Pataki told Wolf Blitzer on CNN earlier that Huckabee’s comments were clearly in jest, but did go on to say, “We should give people their dignity and let them make their own decisions.”

“People often make decisions that I don’t agree with,” the former New York governor said, “but in a government where it’s supposed to be of the people, if someone chooses the path that’s different from mine, we should respect that as opposed to mocking it.”

Pataki also tweeted out the same sentiment later, including Caitlyn Jenner‘s Twitter handle to essentially show his support of her transition:

If someone chooses a path that's different than mine, we should respect it as opposed to mocking…@Caitlyn_Jenner http://t.co/qNwmOMAVVU

…we should give people their dignity and let them make their own decisions @Caitlyn_Jenner http://t.co/9MaUNWQj5x @wolfblitzer @CNN