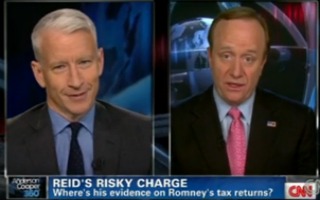 Paul Begala, CNN contributor and advisor to the pro-Barack Obama Super PAC Priorities USA, appeared on CNN’s Anderson Cooper 360 on Thursday night where he defended Sen. Harry Reid’s (D-NV) allegations that Mitt Romney paid no taxes for 10 years. Begala twice invoked “Occam’s Razor” as the best explanation for why Reid’s allegation was true. He was later mocked by Cooper when he said that CNN would have given him a promotion if Reid had made these same accusations as a journalist on the air.

“Paul, you cannot defend Harry Reid on this,” said Cooper. “Can you? Seriously?”

“You watch me,” answered Begala. “First off, there’s tons of evidence. The one release that he prettied up…”

“There is evidence that he hasn’t paid taxes in 10 years,” asked Cooper.

Cooper pointed out that “tax avoidance” was not the allegation that Reid made against Romney.

Begala went on to say that Occam’s Razor dictates that, since Romney has opted not to provide the media with information that would negate Reid’s claim, it is not a logical leap to conclude that Reid is correct.

Begala said that Romney is a man of “impeccable personal moral character” and so he is not investing in “liquor stores that sell to children” or legal prostitution rings in Nevada.

CNN contributor Mary Matalin said that Begala was engaging in fallacious logic and putting the burden of proof on the accused – which is precisely not how the American system of jurisprudence operates.

“They’ve called him a felon, now this,” asked Matalin. “The really sad thing is that, ostensibly, Harry Reid is not some goofball back-bencher. He is the Democratic Senate Majority Leader. Doesn’t’ that give – if I were a Democrat, that would give me great pause.”

Begala angered Cooper when he claimed that Reid would have been given an award if he had made this same allegation as a contributor to CNN, saying that journalists go on the air “all the time” with unnamed sources making accusations.

“You don’t actually go not eh air with a single source,” said Cooper.

“I’ve been doing this for 28 years. When politicians don’t disclose their taxes it’s because they can’t,” Begala concluded.

Watch the segment via CNN: