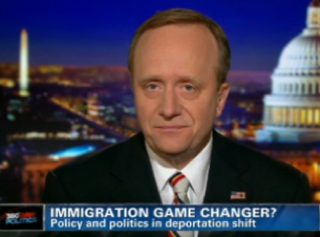 Much has been said in the past two days about the motivations behind President Obama’s new immigration move, though consensus has begun to form around describing it as a political move over a moral one. Whether that matters, however, is another question, and Paul Begala on last night’s Anderson Cooper 360º made the point that playing politics with people’s lives isn’t a new thing to the presidency– after all, Abraham Lincoln did it, too.

“Everything we do this election year will be intertwined between election and politics,” Begala told Anderson Cooper last night, finding it humorous that “everybody has the vapors” over the fact that the move might be political. “Abraham Lincoln withheld the Emancipation Proclamation for political reasons,” he argued, “if you can do it for the Emancipation Proclamation, surely you can do it for the Dream Act.”

Panelist Ana Navarro argued that, even if political, it has an effect on how Republicans respond because it “takes away the sense of urgency” that could fuel moves like the Sen. Marco Rubio-led modified Dream Act, and something that could have been accomplished in Congress, which will now “get angry” about being overridden.

Begala also responded to Mitt Romney‘s response to the move, which was somewhat removed, Begala argued, because Romney “called the Dream Act a handout” and attacked Rick Perry for expressing some sentiments in line with it.