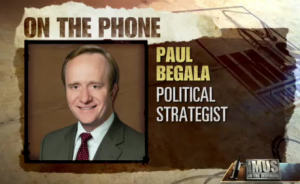 Democratic political strategist Paul Begala spoke with Don Imus this morning on Fox Business Network and unsurprisingly defended President Obama strongly and mocked some of the Republican presidential candidates. Yet the most enjoyable exchange came when Begala and Imus debated whether CNN should truly be considered “the most trusted name in news.”

Begala admitted he might have some complaints about Obama, but compared to Republicans who “want to essentially end Medicare to give tax breaks to the rich,” there is no comparison at all. “He is fighting some of the most far right forces that we’ve ever had assembled in this country and he’s doing a pretty damn good job doing it,” Begala gushed. Yet on Obama’s Afghanistan policy, Begala thought “ten years is enough” and it’s time to get out of there.

Regarding the Republican presidential candidates, Begala dismissed Mitt Romney as someone who “makes mannequins look authentic,” but Begala at least admired the sincerity of Michele Bachmann and Herman Cain. And despite Imus’s hope, Begala didn’t want to pick who his preferred 2012 opponent would be, since he said “I’m haunted by the legend, which I believe is true, that the people who supported Jimmy Carter thought they wanted to run against Ronald Reagan and they got him.”