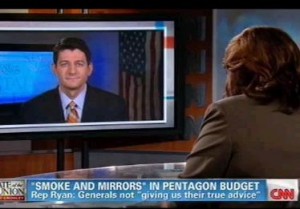 On CNN’s State of the Union today, Congressman Paul Ryan admitted he spoke out of school when he claimed that military leaders did not support President Obama‘s proposed budget for FY 2013. The Chairman of the Joint Chiefs of Staff said Thursday that Ryan was essentially calling them liars. Ryan explained to Candy Crowley that he “misspoke” and that he “didn’t mean to make that kind of an impression.”

Crowley told Ryan that “the military’s a little offended by your words.” Ryan explained that he meant no offense by what he said, and he didn’t intend to claim that he knows better than the military what the military needs.

“I really misspoke, to be candid with you, Candy. I didn’t mean to make that kind of an impression, so I was clumsy in describing the point I was trying to make. The point I was trying to make… is President Obama put out his budget number for the Pentagon first, a 500 billion dollar cut. And then they began the strategy review to conform the budget to meet that number. We think it should have been the other way around.”

Ryan said he wants to cut the Pentagon budget as well, just not as much as the president does. He said the difference he wants to strike will ensure that the military remains lean and efficient while still having enough resources at its disposal to adequately function.