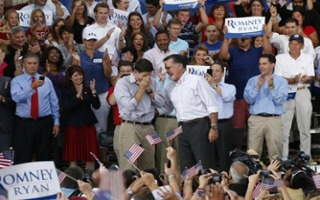 Wisconsin Rep. Paul Ryan became tearful during a rally in his home state on Sunday, his first as the Republican’s vice presidential nominee, alongside GOP presidential candidate Mitt Romney. Ryan said through tears that “it was good to be home,” as he was flanked by Wisconsin natives Gov. Scott Walker and Republican National Committee Chairman Reince Priebus.

Ryan joked that his large family constituted at least half of the rally’s attendance, which was pegged at over 10,000.

“I’m fifth generation from this state,” said Ryan. “This is such a phenomenal place to live, to work, to raise a family.”

“My veins run with cheese, bratwurst, and a little Spotted Cow and some Millers,” Ryan said. “I like to hunt here, I like to fish here, I like to snow mobile here. I even think ice fishing is interesting.”

“We are all family, brother,” replied Ryan. “And that was my brother who said that.”

Ryan noted that the Badger State has seen its fair share of elections over the past two years, referring to the numerous recall elections which followed sweeping Republican victories in 2010.

“On June 5, courage was on the ballot and courage won,” said Ryan. “We Wisconsinites, we saved Wisconsin that day. And, on November 6, we will help save America that day.”