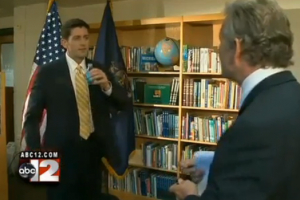 Republican vice-presidential hopeful Paul Ryan made a bit of news when he abruptly cut short an interview with a local reporter in Michigan, but the hissy manner in which he ended the chat seems to have buried the ugly substance of what he said while trying to evade questions about gun control and his tax plan. Asked whether this country has a gun problem, Ryan responded that that it’s a “crime problem,” and volunteered that “The best thing to help prevent violent crime in the inner cities is to bring opportunity in the inner cities. Is to help teach people good discipline, good character.”

There’s a lot wrong with what Ryan said while trying to avoid questions about gun control, from hiding behind President Obama (“I don’t even think President Obama’s proposing more gun laws.”) to his apparent lack of concern over gun suicides (which make up the majority of gun deaths in the U.S.) or accidental child killings. However, these are fairly commonplace facets of conservative gun arguments.

What you don’t often hear spoken (out loud, anyway) is that the real problem with gun violence in America is the “character” and “discipline” of people in the “inner cities,” a very specific delineation from other city folk. Obviously, if you shoot someone to death, there’s a good chance you have a major character flaw or two, but what about all the “inner city” people who are doing the dying? Did they lack the “character” or “discipline” to dodge a bullet? Are rural or suburban murderers and victims more virtuous?

Apparently so. Apparently, crime in our cities has nothing to do with poverty, and systemic failures, fueled by generations of institutionalized racism, but with the character of those people. So says Paul Ryan, and so says Mitt Romney. If you’re poor, it’s because your culture is inferior.

Ryan’s assessment of “inner city” people is of a piece with the not-at-all subtle (and even out-and-proud overt) attitudes of the leading lights in the Republican Party, best exemplified by racism decoder-ring Newt Gingrich, who helpfully singled out black people as the Food Stamp-satisfied people we already knew they were talking about, and who echoed Ryan’s chatter about the low character of the inner city denizens who “have no habits of working and have nobody around them who works. So they literally have no habit of showing up on Monday. They have no habit of staying all day. They have no habit of ‘I do this and you give me cash,’ unless it’s illegal.”

We already knew who the “those people” Romney and Ryan were talking about were, but thanks for the hint, all the same. Here’s the video, from ABC: