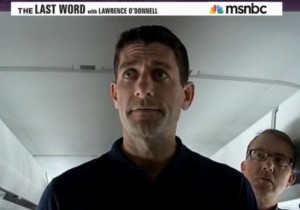 Even as vice-presidential nominee Paul Ryan tries to escape his bonds with “legitimate rape” Congressman Todd Akin by doing his best Barack Obama impersonation, he can’t quite bring himself to denounce his “forcible rape” bill. While he told one interviewer, on Wednesday, that “rape is rape,” when reporters aboard his campaign plane asked him about the Ryan/Akin-sponsored “forcible rape” bill, he responded that he’s “very proud” of his “pro-life record.”

It’s a clear contradiction, one that’s easy to explain. Ryan wants to take credit for being the most extreme anti-choice (including most birth control) candidate, but he doesn’t want to explain what, exactly, he meant by “forcible rape.”

The not-so-secret dirty little secret is that, whatever he meant by “forcible rape,” Paul Ryan doesn’t actually care why, how, and if you were raped, forcibly, legitimately, or whatever, his objective is to force you to carry that rapist’s baby to term.

As The Last Word‘s Lawrence O’Donnell points out, Ryan also assured reporters that, while he may hold one set of views on abortion and rape, Mitt Romney is at the top of the ticket, and “the President sets policy.”

Perhaps more tellingly, though, he said a ban on abortion with exceptions for rape and incest (an exception which Ryan opposes) is a “step in the right direction.”

That direction, of course, is a federal law that recognizes personhood at the point of conception, turning abortion, most birth control, and most fertility treatments, into murder. While that position is extreme to many Americans, it is one that is shared by a substantial number of legislators (the people who make the laws), and it’s the Holy Grail of the extreme anti-abortion movement. When Paul Ryan says that a ban on abortion with an exception for rape is a “step in the right direction,” this is the direction he’s referring to.

When Paul Ryan explains that “the President sets policy,” he isn’t just explaining why the Romney/Ryan ticket shouldn’t be held accountable for his own views, he’s also reminding voters that if their ticket wins, he and his Holy Grail of anti-abortion policies will be one heartbeat away from the presidency, from being able to sign into law any crazy piece of anti-choice legislation the US Congress sends his way.

That might not mean much to the kind of voter who is lightly engaged on the issue of choice, who just likes the way the words “Pro Life” sound together, but you can bet it means everything to a movement that views abortion, and even many forms of contraception, as baby-murder. The problem is, it’s tough to get the average voter as worked up about protecting reproductive freedom as it is to excite the Operation Rescue crowd.

What often gets lost in the abortion rights debate is that people on both sides of it largely agree that it would be good if there were fewer abortions, they just disagree on the means to achieve that. The pro-choice side believes in greater access to, and education about, contraception, and in building a society that provides women with the basic support they need to choose to keep a baby, if they want to. The anti-abortion side believes in using the law to make it harder to get an abortion, and even if they’re reasonable individuals, end up lining up with people who weirdly oppose contraception.

But most sane people don’t view abortion, or the use of the birth control pill, as actual murder, punishable by death. It may sound like alarmism to the moderate mind, but a vote for Romney/Ryan is a vote for that view, whether it’s at the top or the bottom of the ticket. Even if Paul Ryan is never called upon to serve as president, does anyone really believe that a President Romney, when presented with a personhood bill by a GOP-controlled congress, will have the political will to veto it?