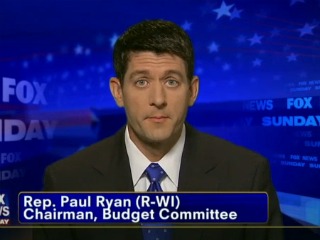 On Fox News Sunday this past weekend, Wisconsin’s Rep. Paul Ryan (R) was invited on to offer his early response to President Barack Obama’s revamped deficit reduction plan. It is set to include, among other provisions, $4 trillion in savings, $340 billion in Medicare / Medicaid reform, and $800 billion in revenue increases, which includes a new plan to ensure those in the highest tax bracket pay at least the same percentage of earnings as those in the middle class. Ryan said he’s trying to keep an open mind where this plan is concerned, but doesn’t know if “any good will come” out of a Democratic President attempting to “take on” entitlement programs like Medicare.

“From what he hear originally,” shared Ryan, “it looks like it’s just more price controls and reimbursement cuts to doctors and other health care providers, which simply leads to restricted access and denied care to seniors.” Ryan was also, perhaps unsurprisingly, wary of the President’s likely tax increase for the wealthy:

Permanent tax increases on job creators doesn’t work to grow the economy; it’s actually fueling the uncertainty that is hurting job growth right now. And don’t forget the fact that most small businesses file their taxes as individuals, so when you’re raising these top tax rates, you’re raising taxes on these job creators where more than half of Americans get their jobs from in this country.

So what we want to see are pro-growth economics, even the President’s fiscal commission is saying — with Democrats on there — lower tax rates, broaden the tax base for economic growth, and just more nickel and dime reimbursement cuts to health care providers will simply lead to less access to care for senior citizens.

While Rep. Ryan remains one of the few refreshingly civil, even-keeled politicians on either side of the aisle, he seems to have grown slightly more wary of the President’s plan than he did during last week’s appearance on Morning Joe.

Have a look at the full interview, courtesy of Fox News: