Paul Ryan: ‘Our Rights Come From Nature And God, Not From Government’
Video

Paul Ryan: ‘Our Rights Come From Nature And God, Not From Government’ 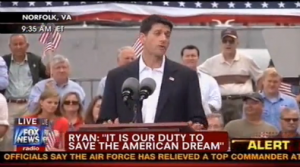 On Saturday, Mitt Romney running mate Paul Ryan took to the podium to not only introduce himself to American voters, but provide a contrast between Romney and President Barack Obama.

After noting his work with both parties, Ryan vowed, along with Romney to turn “ideas into actions and action into solutions.”

“I am committed in heart and mind to putting that experience to work in a Romney administration,” he said. “This is a crucial moment in the life of our nation. It is absolutely vital that we select the right man to lead America back to prosperity and greatness. That man is sitting right next to me. His name is Mitt Romney.”

“Let me say a word about the man Mitt Romney is about to replace,” he said, to applause from the crowd.:

No one disputes that President Obama inherited a difficult situation. n his first two years with his party in complete control in Washington, he passed almost every item on his agenda. That didn’t make things better. In fact, we find ourselves a nation facing debt, doubt and despair.

This is the worst economic recovery in 70 years. Unemployment has been above 8 percent for more than 3 years. The longest run since the great depression. Families are hurting. We had the largest deficit and the biggest federal government since World War II. Nearly one out of 6 Americans are in poverty, the worst rate in a generation. Moms and dads are struggling to make ends meet. Household incomes have dropped more than 4,000 dollars over the past four years. Whatever the explanations, whatever the excuses excuses, this is a record of failure.

President Obama and too many like him in Washington have refused to make difficult decisions because they are more worried about their next election than they are about the next generation. We might have been able to get away with that before, but not now. We are running out of time and we can’t afford four more years of this.

Ryan noted that, in talking to Americans, he has heard rhetoric relating to “diminished dreams, lowered expectations, uncertain futures. I heard some people say this is just the new normal. Higher unemployment and crushing debt is not a new normal. It is the result of misguided policies.”

He also provided an additional contrast against previous statements made by Obama when he noted that “I am proud to stand with a man who understands what it takes to foster job creation in our economy; someone who knows from experience that if you have a small business, you did build that.” Ryan heralded Romney as a job creator, and commended his role in the Salt Lake City Olympic games.

“America is more than just a place, though,” he added later. “America is an idea. It’s the only country founded on an idea. Our rights come from nature and god, not from government. That’s who we are. That’s how we built this country. That’s who we are. that’s what made us great. that’s our country. We promise equal opportunity, not equal outcomes.”

Have a look at Ryan’s speech, via Fox News: