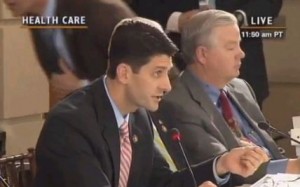 Speaking at the health care summit, a direct Ryan told the commander-in-chief:

“Look we agree on the problem here and the problem is health inflation is driving us off a fiscal cliff. Mr. President, you said health care reform is budget reform. You’re right. We agree with that. Medicare right now has a $38 trillion unfunded liability…And in September when you spoke to us in the well of the House, you basically said — and I totally agree with this — ‘I will not sign a plan that adds one dime to our deficits either now or in the future.’ Since the Congressional Budget Office can’t score your bill because it doesn’t have sufficient detail, but it tracks very similar to the Senate bill, I want to unpack the Senate score a little bit. And if you take a look at these CBO analysis, analysis from your chief actuary, I think it’s very revealing. This bill does not control costs. This bill does not reduce deficits. Instead this bill adds a new health care entitlement at a time when we have no idea how to pay for the entitlements we already have…The Senate Budget Committee chairman said that this is a Ponzi scheme that would make Bernie Madoff proud.”

An alert Ryan went on to school Obama on the issue. Watch the full clip below — you’d be hard-pressed to find a more titillating health care summit conversation. Expect a lot of roasts in the upcoming presidential debates: