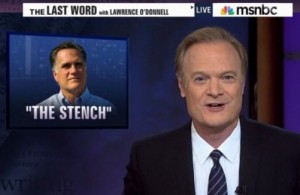 The Mitt Romney campaign has a face, and now, apparently, The New York Times has given it a name. Based on a Times quote from Republican operative Craig Robinson, Politico‘s Roger Simon reports that Romney running mate Paul Ryan has taken to calling the former Massachusetts Governor “The Stench” behind his back, and behind closed doors. The sources for the secondhand quotes are unattributed, but they’re sticking, and despite the unbridled glee Lawrence O’Donnell displayed on Tuesday night’s The Last Word at such succinct Romney-bashing, they say more about Paul Ryan than anyone else.

Craig Robinson, former political director for the Republican Party of Iowa, told The New York Times, this weekend, that “if Ryan wants to run for national office again, he’ll probably have to wash the stench of Romney off of him.”

According to Politico‘s Roger Simon, that quote, and other recent criticisms in the press, are getting to Ryan:

Reportedly, he has been marching around his campaign bus, saying things like, “If Stench calls, take a message” and “Tell Stench I’m having finger sandwiches with Peggy Noonan and will text him later.”

…Appearing at a town hall meeting at the University of Central Florida in Orlando, Ryan showed the glitz, the glamour, the razzle-dazzle that he was supposed to bring to the campaign in the first place.

He did a PowerPoint presentation for the crowd… The Romney campaign was furious. But Ryan reportedly said, “Let Ryan be Ryan and let the Stench be the Stench.”

On Wednesday night’s The Last Word, host Lawrence O’Donnell reported on the Politico piece with the joy of a prizefighter in a meat locker, and when The Cycle co-host Krystal Ball expressed laughing disbelief, O’Donnell assured her that “Politico has people in the field.”

It’s true that Roger Simon is a columnist, and the quotes are unsourced, leaving the piece vulnerable to attack by folks like MSNBC’s Republican analyst Susan Del Percio, who called the “Stench” remarks “alleged quotes” on air yesterday, but such qualms are for the tourists. Simon’s anecdote has the recognizable (to the Beltway crowd) ring of truth that renders it canonical in political circles. Whether Susan Del Percio believes those quotes or not, you can bet Mitt Romney does (Simon also reveals that Ryan’s handlers have taken to calling him “Gilligan”).

For what it’s worth, I believe the quotes are real, but in Ryan’s defense (because somebody has to), my initial take was that, absent the filter of Roger Simon’s commentary, Ryan may well have been mocking the mainstream media for suddenly giving a rat’s ass what Peggy Noonan (who always sounds like she’s trying to break some bad news to a baby, without waking it up) and some obscure Iowa Republican have to say, rather than actually excoriating Romney. Maybe. If Romney asks, Ryan should go with this explanation.

But either way you look at it, Simon’s anecdote demonstrates that the Romney campaign’s toxic press is in Ryan’s head. In this electoral game of chicken, Ryan is already unbuckling his seatbelt and visualizing his roll onto the shoulder. What’s truly ironic, though, is that of the two halves of this ticket, Paul Ryan is, hands down, the anchor around its neck with key constituencies of general election voters. That Ryan gets the Darryl Hall reaction to Romney’s Oates should tell you everything you need to know about the Republican base.

Update: Simon tells Buzzfeed that his column was something called “satire,” which normally wouldn’t include what Simon thinks it does, like “describing PowerPoint as having been invented to euthanize cattle,” which is self-evident hyperbole, not satire, and normally is used in service of a larger, central critique (like, maybe, Politico‘s egregious use of blind quotes, or the mainstream media’s sudden interest in Peggy Noonan), not just to fill space at Politico. In any case, Buzzfeed lists us as an outlet that was “fooled” by Simon’s not-actually-satire, but in my defense, I used scare-quotes in the headline, and correctly identified the remarks themselves as satirical in nature. Roger Simon has reportedly apologized abjectly, saying “Tommy Christopher is absolutely right, I have no idea what the f*ck ‘satire’ means. I should really just STFU right about now.”