Paul Ryan to Cave in to Donald Trump in Three, Two, One… 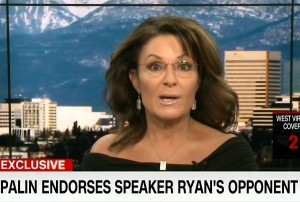 The political media awaits with bated breath to see who will blink first in the current staring contest between presumptive Republican presidential nominee Donald Trump and current Republican Speaker of the House Paul Ryan, with many predicting that Ryan will hold fast in order to try and bolster his party’s chances in down-ticket races. Ryan himself has repeatedly laughed and smirked at the suggestion that crossing Trump could exact a political price.

Paul Ryan has been reelected to his House seat in every term since 1998, never coming closer than 11 points to losing it, and the remaining political clout of a Sarah Palin endorsement is questionable, but that doesn’t mean Ryan can or will ignore the prospect of losing his seat. Ryan hasn’t faced a Republican primary since 1998, and although he has a lot of campaign cash on hand, Nehlen could be the beneficiary of a lot of outside money if Ryan continues to buck Trump. At best, Ryan could wind up in an expensive primary fight leading up to a general election in a presidential year, the least favorable terrain for a Republican.

The real key to this battle, though, is that Trump knows that Ryan needs him much more than Trump needs Ryan. When the two meet in Washington on Thursday, expect Ryan to emerge with some sort of face-saving reason to suddenly endorse Trump, whom Ryan has already said comes from “the same principles” as the GOP just days before telling Jake Tapper that he needed to see more conservative principles out of Trump. This has always been a shadow dance, but one which Ryan surely thought would end with Trump moving closer to him. Ryan will extract nothing from Trump, and Trump will extract an endorsement from Ryan.