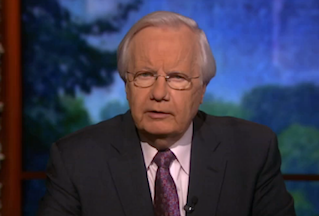 On Friday’s edition of Moyers & Company, host Bill Moyers delivered a devastating take down of the Republican Party’s systematic efforts to dismantle President Obama’s Affordable Care Act. Since the law passed, Moyers said, Republicans have “stalked it like Jack The Ripper.”

Moyers began by looking at the Republican members of Congress who demanded an apology from those responsible for the problems with the HealthCare.gov website. But once they got contrition from Secretary of Health and Human Services Kathleen Sebelius, Moyers said, “the apology didn’t squelch the partisan tirades or quench the Republican thirst for revenge.”

“Isn’t it fair to also expect at least a tiny bit of remorse, just a morsel of apology from Republicans?” Moyers asked. This led Moyers to his “Jack The Ripper” analogy, saying the GOP has “stalked” Obamacare “in the states, through the courts, all the way to the Supreme Court, which–uh-oh–ruled it constitutional. In last year’s election, when they lost again. But quit? Never. For Republicans, this has become their Alamo.”

Moyers explained that the Obama Administration “naively” figured that Republican-run states would gladly accept federal funds to set up their own insurance exchanges and expand Medicare. “Republicans, it seems, have their principles,” he said. “And health care for poor people is not one of them.”

The host resisted the urge to say “I told you so” after suggesting several years back that a public option would have been more effective that the “Rube Goldberg device” that is Obamacare.