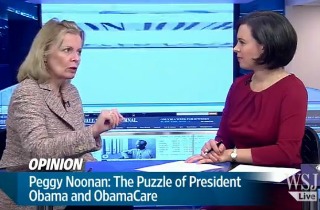 Wall Street Journal columnist Peggy Noonan joined WSJ Live host Mary Kissel on Friday where they discussed the ongoing issues associated with the implementation of the Affordable Care Act. Noonan said she found the way in which this administration has handled this crisis has been among the “oddest” she’s seen. Noonan added that she would like to see “humility” from President Barack Obama rather than combativeness.

Kissel began by asking about the “puzzle” of the president’s response to the crisis surrounding the ACA’s faltering website.

“I look at the White House the past two months, I think the president and those around him perhaps do not understand deep and serious history well enough to understand the size and scope of the debacle they’re in,” Noonan said. “They keep handling it as a problem, so they keep jerking forward with different ideas each day and different approaches.”

“It’s the oddest handling of an authentic crisis I’ve ever seen,” she added.

Kissel noted that the WSJ editorial page has suggested that Obama defaults to pugnacity when he is confronted with a public relations issue. When asked what she thought was behind Obama’s odd response to a crisis, Noonan replied, “Youth.”

RELATED: Kimmel: Number of People Signed Up for Obamacare Dwarfed by Number of Obama’s Speeches

“What should he do?” Kissel asked.

“Be very serious about it,” Noonan answered. “Very clearly, without weasel words, admit the problem.”

“You know what I would love to see from the president? Humility,” she continued. “And almost embarrassed sense that they hadn’t done it right and they’re going to go back to square one, work with Republicans, and get it right.”