Pelosi To Fallon: Unlike Current ‘Obstruction’ Of Obama, My Congress ‘Cooperated With Pres Bush’
video

Pelosi To Fallon: Unlike Current ‘Obstruction’ Of Obama, My Congress ‘Cooperated With Pres Bush’ 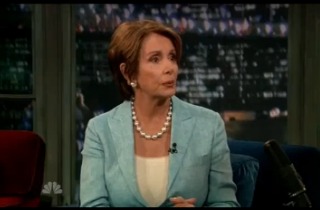 During Friday evening’s edition of Late Night, former House Speaker Nancy Pelosi told host Jimmy Fallon that unlike this current Republican-controlled Congress, which she views as having a “philosophy” of “obstruction,” her time as Speaker of the House was marked by her cooperation with President George W. Bush.

“This obstruction of the president is something quite new,” Pelosi said to Fallon. She lamented that, in her view, Congress isn’t as “civil” as it used to be: “There was much more civility, and you came to get a job done. Certainly, you advocated for your point of view, but you always strove to find common ground. And i think we have to return to that place.”

Pelosi then took shots at the John Boehner-led Republican House: “The president has tried to cooperate with the Republican majority led by Speaker Boehner, they really have not cooperated with him. That obstruction has really been their philosophy.”

“They just won’t cooperate with him,” she continued. “So that’s why this selection is so important. We must re-elect President Obama and give him a Congress that can work with him,” she said to cheers and applause.

Fallon then asked the California congresswoman about her relationship with Boehner, which she characterized as “cordial,” but then proceeded to claim that she was a more cooperative

“When I was speaker, I cooperated with him with President Bush,” she claimed to Fallon. “This obstruction of the president is something quite new. We got a good deal done when President Bush was president because we said, ‘How can we work together to get results — to solve problems for the American people?'”

“But they have just made a decision to obstruct President Obama,” she concluded. “And that’s just not right for the American people.”