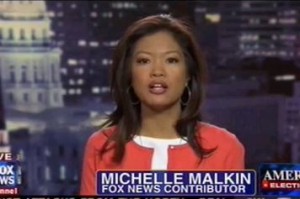 “This is my emetic of the morning! Akkkkkgh!” she joked.

RELATED: Nancy Pelosi To Maddow: Without Passing Healthcare ‘We May Have Lost More Seats’

“Are you okay?” Doocy worriedly replied.

“She’s actually a serial offender when it comes to invoking the founding fathers to justify this holy unconstitutional mother of all unconstitutional mandates!” Malkin exclaimed. “She did this before a couple of years ago after it was shoved down the American people’s throats. I really think this should be banned on the House floor. It’s funny how she finally discovers the founding fathers, only to justify the worst excesses of government.”

On Wednesday, Pelosi spoke on the House floor, to remind her fellow Congress members “what our founders put forth in our founding documents, which is life, liberty, and the pursuit of happiness. And that is exactly what the Affordable Care Act helps to guarantee.”

Malkin is correct to assert that Pelosi had previously invoked the Declaration of Independence to support the Obama’s health care bill. In 2010, Pelosi said “We will honor the vows of our founders, who in the Declaration of Independence said that we are ‘endowed by our Creator with certain unalienable rights, that among these are life, liberty and the pursuit of happiness.’ This legislation will lead to healthier lives, more liberty to pursue hopes and dreams and happiness for the American people. This is an American proposal that honors the traditions of our country.”

Watch Malkin nearly toss her cookies from Pelosi’s proclamation below, via Fox News: