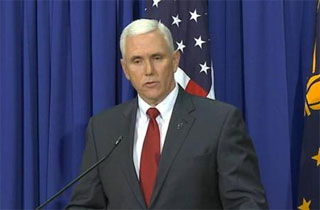 The last question at Gov Mike Pence‘s (R-IN) press conference, in which he promised a “legislative fix” to a controversial religious freedom law, was aimed not at the law itself, but the motivations behind the governor’s actions.

The question from a reporter: “Do you personally believe that Christian businesses that have deeply held beliefs about marriage should be compelled to provide services, whether it’s photography, flowers, baking, across the board — to gay and lesbian couples?”

“I understand what you’re doing with the law — you personally,” the reporter continued when Pence gave a similar talking point about the law’s intent. “I think we all know how things have changed since ’93 to today, we know the reasons behind these laws. We saw this a year ago in Arizona.” He then repeated his question.

I don’t support discrimination against anyone. The question that you pose, though, I believe — it’s — we’re dealing here, in a free society, with always a careful balancing of interests. and the facts and circumstances of each case determines the outcome. What this legislation dos, what it did when President Clinton signed it into law in 1993, and what it serves in some 30 states where its been the law, is provide a framework for determining whether or not government action puts a substantial burden on person’s religious liberty. Now it’s counterbalanced against whether there is a compelling interest. The first question is, in any case: does the government action place a substantial burden on the free exercise of religion under this standard as it has been applied for decades. The second question is, is there a compelling state interest? And what courts have found without exception n the past twenty-plus years, is that the state has a compelling interest in combating discrimination, and I support that interpretation.

So… that was an answer?