Penn Jillette Clashes with CNN Guest over Indiana: You’re Not Being Forced to Have Gay Sex 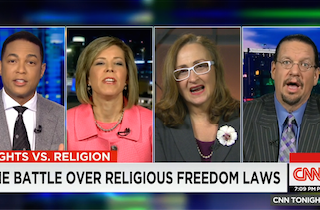 CNN’s Don Lemon organized a panel tonight on Indiana’s controversial religious freedom law and how similar measures are popping up in other states. Kristen Waggoner defended the law and dismissed “absurd hypotheticals” from the media about a measure that’s meant to “benefit all Americans.” Lemon challenged her on whether the law “discriminates” and she insisted the law is about religious freedom.

Lemon shot back that it just isn’t, saying “if you don’t want to serve everyone… perhaps you should be doing something else.” Waggoner said the law is a response to the government “attacking people of faith” and called such attacks “un-American.” Lemon said, “What is un-American is to not allow everyone to have the same rights.”

Rita Sklar, from the Arkansas branch of the ACLU, backed Lemon up and said “this is about trying to use religious as a means of discriminating.”

Penn Jillette, both an atheist and a libertarian, acknowledged that, as a result of that mix, he’s been internally conflicted about the law. But, ultimately, there was one sticking point for him: “These people are not being asked to engage in gay sex… They’re being asked to sell flowers and cake to people.”

He told Waggoner it’s just about equal treatment for people who would like to use services. Waggoner stood by her belief that businesses shouldn’t be forced to go beyond their religious beliefs, but Jillette pointed out, “CNN is allowing you to say things they don’t agree with.”

The segment ended with both Lemon and Jillette agreeing that the arguments being used by proponents of the law today were the same arguments made about black people and interracial marriage decades ago.