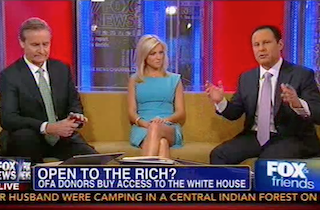 “Closed to the poor and open to the rich” was Fox & Friends‘ characterization of the White House on Monday when they tackled the issue of the White House granting access to top donors, an charge the administration has denied. In light of the recent cancellation of the tours, the hosts noted, the situation looks even worse.

Specifically, the segment was pegged off a piece by Mark McKinnon, who wrote, “The most open government? If you have the money to buy access, yes.”

Since last weekend, Mr and Mrs Regular Citizen have been denied the access people used to be granted to tour the White House, purportedly because of the clampdown on federal spending since the “sequester” that imposed cuts across the board.
[…]
Meanwhile, noble Americans can buy time with the president for a suggested donation of $500,000 to his new campaign group, Organising for Action.

Yes, the announcement offering access to the president for cold, hard cash was made openly and with total transparency. But it was also made without shame.

Obama promised the “people’s house, Brian Kilmeade remarked. One that would not be “subjected to lobbyist groups. He’s not going to owe anyone anything.” The tours are closed “because of that scary darn sequester,” Steve Doocy chimed in, yet the rich still have access. So much for “the most transparent president in the history of the planet.”

“The White House is closed to the poor and open to the rich,” Doocy asserted.

“He’s got three and a half years to fix that image,” Kilmeade added, noting that McKinnon “really is bipartisan” and “has not been the harshest critic of the president by a long shot.”