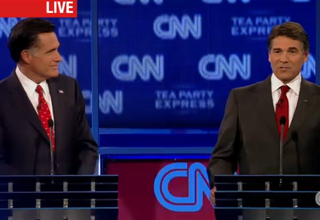 It didn’t take long after an extended introduction by CNN that seemed to have been put together by a veteran sports production team for tonight’s 2012 Republican debate to get red hot. After raising a number of eyebrows at least week’s debate by calling Social Security a “Ponzi scheme,” Rick Perry was forced to address the comments on the first question. What followed was a heated exchange with fellow frontrunner Mitt Romney where they two left nothing off the table.

Moderator Wolf Blitzer opened the debate asking Perry whether he stuck to his strong rhetoric on Social Security. “Slam dunk guaranteed,” he answered, “that program is going to be there for them” under his presidency, Perry replied, suggesting he would keep it, but “the idea that we have not had the courage and stand up and look Americans in the face” to fix the program, to Perry, was a problem.

Blitzer took the opportunity to ask Romney whether, because of such rhetoric, he found Perry unelectable. “I think what he said, most people agree with,” Romney replied, “but the term ‘Ponzi scheme’ I think is over the top and unnecessary and frightful to people. He added that he found the claim that Social Security is “unconstitutional” to be problematic– all of which Perry retorted with “if what you’re trying to say is that back in the ’30s and ’40s, the federal government made all the right decisions, I disagree with you.”

The back and forth continues for quite a bit, starting off the debate with fireworks. The exchange via CNN below: