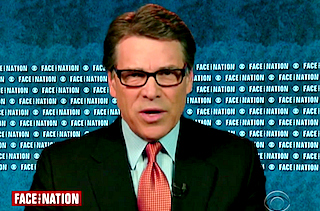 In what’s becoming a ritual for GOP figures who enter the national conversation, Texas Governor Rick Perry took the pages of the Washington Post on Saturday to critique Senator Rand Paul’s (R-KY) “isolationist” foreign policy. After Paul fired back, telling Perry to worry about his own border before the policy positions of Paul, Perry responded on Sunday’s Face the Nation.

“We have allies [in the Middle East], in the form of Israel and Jordan, that expect us to stand with them to help them,” Perry said.

“I disagree with Senator Paul’s representation of what America should be doing,” he continued. “He talked about basically what I consider to be isolationist policies. America can no longer come back on to the continental United States and draw a red line around the shore of America and think that we’re somehow another not going to be impacted. We must engage and tactically, thoughtfully, using the assets that we have against ISIS to keep these individuals from being able to create an Islamic state in that part of the world that will put Jordan and put Israel’s literal future in jeopardy.”

Paul also asked how many troops Perry was willing to send to Iraq, a country that was flailing to defend itself.

“The idea that I’m for opening up the gates and sending multiple numbers of American troops back in to harm’s way is a bit of a stretch,” Perry replied.