Touré Welcomes Viewers To The Cycle: ‘The Junior Partners Took Over The Conference Room’
video

Touré Welcomes Viewers To The Cycle: ‘The Junior Partners Took Over The Conference Room’ 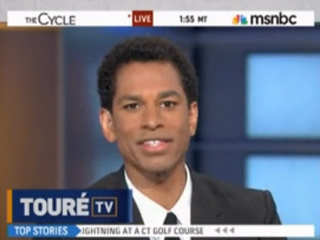 MSNBC debuted its latest offering this afternoon, The Cycle, and after several interview segments where the guests had to field questions from all four of their hosts, Touré welcomed the audience and explained what their conversation will be all about. “We’re a group of friends having a dinner party in the afternoon,” he explained, calling each a “very different part of a puzzle,” together trying to come up with ways to make America better.

Noting that the goal would be to talk “politics and culture in the ensemble format that has existed since the beginning of television because it still works,” Touré explained that the concept is something like if the partners at a law firm walked out for some time and “junior partners took over the conference room,” and emphasized how different the roles of the four hosts would be:

“We’re going to have sparks because we are four very different parts of a puzzle: two men and two women, three whites and one brother; three of us are progressive and S.E. is conservative; three of us are from Massachusetts and Krystal is from Virginia; I like women the three of them like men; three of us are writers, Krystal is an activist; three of us are in our 30s, one is in their very, very early 40s; two of us are married parents, two of us are single; two of us can see– there’s lots of ways to slice the pie, but no matter where you place the knife, we’re friends who believe in America and want to see it succeed.”

Touré also addressed the fact that there was a conservative on the show, which he thought was integral to debate. “If we exclude the views of the other side, we’re no better than them,” he argued, and welcomed debate with Cupp because “steel sharpens steel, and I like to know what the enemy is thinking.” Touré’s welcome then led the way to a friendly greeting from the three in response, with Ball comforting Cupp after Touré jokingly called her “the enemy” and Kornacki promising Touré on the ladies’ behalf to “get you off that liking women thing.”