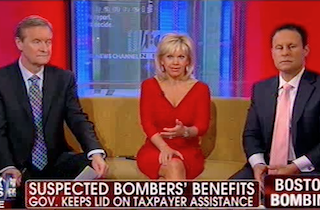 Fox & Friends continued Boston coverage on Friday, focusing in on the surviving bombing suspect and his family. Namely, that they were reportedly on welfare and Massachusetts Gov. Deval Patrick has thus far refused to elaborate on that. It’s public knowledge, the hosts argued — and, given the circumstances, should not be kept undisclosed for privacy reasons.

Updating viewers on some of the developments (Dzhokhar Tsarnaev has been moved from the hospital to a medical detention facility), the hosts also took note of the suspects’ mother, who gave an interview yesterday to CNN. While she was clearly “crazy with grief and rage,” Steve Doocy noted, “from all indications, she was crazy before.”

Agreeing that there won’t be much sympathy for the mother, Gretchen Carlson pivoted to the welfare angle on the story, asking, “Were the two suspects and the entire family, for that matter, on the government dole for the entire time that they lived here in the United States of America, a country they now hate?”

Informing that Patrick won’t further explain what assistance the family received due to personal privacy, Carlson questioned how privacy comes into play when one of the suspects is dead. If taxpayers were financing the family, she argued, the information should be “public knowledge.”

Doocy further alluded to radio host Howie Carr‘s recent remarks about Patrick, in which he contended that the governor was “standing up for the rights of terror” — which, for a Democrat, is a “resumé enhancer.”