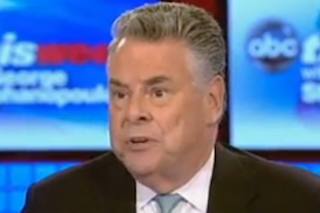 New York Representative Pete King sparred with a panel on Sunday morning’s This Week, arguing that Guantanamo Bay had kept America safe and that he was offended by Obama’s “moralizing” speech on closing the prison.

“Whether people agree or disagree with Guantanamo, many experts believe it did work, was something that had to be done at the time,” King said. “For [Obama] to be saying, ‘what people will think about us ten or twenty years from now,’ I would say maybe they felt we prevented an attack on the homeland for the last eleven-and-a-half or twelve years, which to me is the main obligation of a commander of chief.”

“I’ve been to Guantanamo,” King continued. “It’s a model prison. Is it ideal? No, but we live in a very unideal world.”

Admiral Dennis Blair, who was involved in the original decision to send detainees back to Yemen before the Underwear Bomber incident, made the case that “conditions in Yemen had improved,” and that there were about eighty detainees who had been deemed eligible for release and ought to be sent back.

“One fifth of those whom we’ve released go back to the battlefield,” Blair said, in an astute and balanced point, “so we are taking a chance that some that we release will try to kill Americans servicemen or Americans. But I think that is, in the current situation, a price worth paying, and that price that goes down as time goes by.”

“It’s actually closer to thirty percent of detainees released come back against us,” King responded. “I know the situation in Yemen has somewhat improved. But I am very concerned about sending detainees back to Yemen. I don’t trust the government. We trusted the once before, it didn’t work. The new government—I still don’t think it’s strong enough to risk sending back that many detainees who could come back and kill Americans.”

“[Obama’s] not suggesting any one of these 166 prisoners should be released,” said DNC Chair Debbie Wasserman Schultz. “The plan that he has is to make sure if they are sent to another country, that they either be imprisoned or rehabbed, if they are rehabilitatable, and that we make sure that those that should be tried need to be tried by military commissions, but that that can be done in the U.S. We have to balance our values with protecting Americans.”

“What has the effect been of Guantanamo?” host Martha Raddatz asked. “It has, it seems, been a rallying cry.”

“Everything’s a rallying cry,” King said. “During the 1990s the only time we used troops under President Clinton was to defend Muslims against Christians in Bosnia and Kosovo or yet we were attacked on 9/11 by Muslims. There’s always gonna be some reason. Part of it is the American media and people in politics stir up about Guantanamo, we should be proud, defend what we’re doing, and stop apologizing for America.”