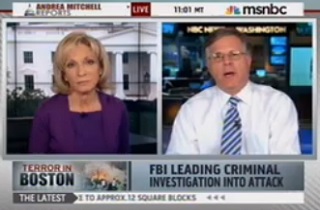 At a press conference Tuesday morning, FBI Special Agent In Charge Rick DesLauriers refused to discuss details about the devices used in Monday’s bombings of the Boston Marathon, but that hasn’t stopped someone close to the investigation from leaking the claim that the devices were made from pressure cookers, and carried in backpacks. On Tuesday afternoon’s Andrea Mitchell Reports, NBC News Chief Justice Correspondent Pete Williams cited “authorities” when reporting that pressure cookers were used, and he and host Andrea Mitchell waxed geriatric about the largely-outmoded appliance.

The Associated Press reported on the pressure cookers about an hour earlier, citing “a person briefed on the investigation”:

The two bombs that ripped through the crowds at the Boston Marathon, killing three people and wounding more than 170, were fashioned out of pressure cookers and packed with shards of metal, nails and ball bearings, a person briefed on the investigation said Tuesday.

…A person who spoke on the condition of anonymity because the investigation was still going on said that the explosives were put in 6-liter pressure cookers, placed in black duffel bags and left on the ground. They were packed with shrapnel to inflict maximum carnage, the person said.

The person said law enforcement officials have some of the bomb components but do not yet know what was used to set off the explosives.

Not long after that, Andrea Mitchell asked Pete Williams to explain what he’d learned “exclusively” about the bombs.

“What we’re told by authorities, Andrea, is that they’re crudely made,” Williams began. “They appear to have been assembled inside a pressure cooker.”

He then proceeded to explain this “cooker” of “pressure” to the citizens of the planet Whippersnapper. “It may be some of our younger viewers don’t know what that is, but in the olden days, when you wanted to make something tender, you put it in this pot with a tight lid on it, and the steam wouldn’t escape, and you could build up pressure and things cook faster in them. The pre-microwave days.”

Williams went on to explain that such a bomb “includes a low-power explosive, something like black or smokeless powder, gun powder, if you will. not a high explosive like dynamite, or a plastic explosive or the common TATP, which seems to be the one of choice of terrorists when they build bombs, terror bombs overseas. So it’s crudely made, it’s set off they believe by some kind of electronic timer. It’s carried to the scene, they believe, in some kind of back pack and then just set down before the devices go off. Unfortunately, all bombs can be devastating when they go off. This was not one that was, in the word that seems to be the a parlance these days, sophisticated.”

Mitchell then asked NBC counter-terrorism expert Michael Leiter to weigh in on the pressure cooker, “used in my childhood to make soups and stews before crockpots, before things were done electronically, tell me what this tells you about the possibilities?”

Leiter replied that “The basic aspect of using a pressure cooker, frankly, I don’t think it tells us all that much. That’s because we’ve had some homegrown groups that have used this. And we’ve also had inspired, foreign-inspired folks use something like this.”

The report was fine with the broad strokes, but as any fan of Top Chef will tell you, their descriptions of the pressure cooker’s successors were rather flawed. While pressure cookers and microwaves both speed cooking times, you would only ever use a microwave for that purpose if you wanted to ruin your food. Crockpots do achieve the goal of “making something tender,” as a pressure cooker does, but take four or five times longer to do it. The extent to which pressure cookers have fallen out of popular use, it’s probably due more to the fact that people like me were first introduced to the spinning, hissing thing with a warning from our Grandmas that it might explode if you treat it wrong. But they are still used, and do things that microwaves and crockpots cannot.

Perhaps more importantly, though, these reports raise questions about the person leaking them, and their purpose for doing so. Reporters report things, that’s what they do, but what possible interest could a person close to the investigation have for leaking this information? Is the public supposed to be on the lookout for the empty-handed guy at their next potluck dinner? Whatever their motivation, the result is unlikely to be helpful. With the perpetrator(s) still at large, any detail that law enforcement has chosen to withhold is a source of aid to the bomber.