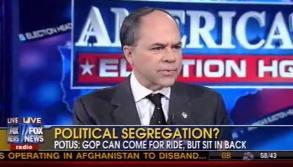 Maybe if you listen to his comments backwards, they’ll sound like beautiful poetry. But if you listen to it forwards, it just sounds like race-baiting. Which brings us to today, and the whole ‘sit in the back’ manufactured controversy.

Tommy Christopher broke down the way Pres. Obama’s new entry to the ditch analogy has been misconstrued by conservatives. There’s no better example than Peter Johnson, Jr. this morning, who absolutely mangled the context. The line that has gotten some up in arms over the last two days was that the Republicans have “got to sit in back.” Remember, this is a speech Obama has made countless times. Here’s pretty much the same thing a couple weeks ago. “You gotta sit in the backseat, because you don’t know how to drive,” he said of the Republicans.

Now let’s take it to Fox & Friends this morning. “Oh really?” asked Brian Kilmeade, outraged. “Should the President be bringing up imagery of segregation?”

Probably not. But, of course, he didn’t. Should Fox & Friends be bringing up imagery of segregation?

Anyway, it was time for Johnson and his cool, calm, offensive commentary. “It’s a peculiar, and strange, and haunting, and really backwards reference that we’re seeing by the President,” said Johnson. “The notion of being in the back of the bus, and that’s a matter of sad American history, embarrassing American history. Rosa Parks, in December 1955 changed the course of American history.”

Alright, stop. The President never said back of the bus. How are you missing that it’s a car analogy, Peter Johnson? He’s made the same analogy dozens of times. He’s not talking about a “malignant, charged era in American history,” and saying “you can’t have the keys but we’ll let you sit in the back of the bus.” He’s saying Republicans can’t drive. It’s auto-ist. It’s age-ist, maybe (they’re too young to drive?). But it has nothing to do with race.

For a past entry of “Peter Johnson, Jr. calmly says offensive things,” check out his take on the ‘Ground Zero Mosque’. And below, his comments today, from FNC: