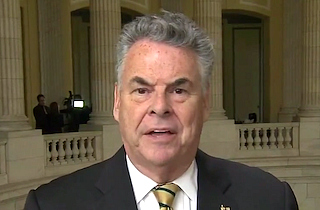 Representative Peter King (R-NY), a virulent critic of the GOP’s defund-strategy from the very beginning, told Fox News Wednesday afternoon that the House GOP leaders had known the strategy was doomed but had been unable to fight the caucus committed to defunding it.

“I thought it was a misguided fight from the start,” King said. “John Boehner (R-OH) and Eric Cantor (R-VA) both told us in early September that this was doomed to failure, but they had no choice because we had thirty-five or forty Republicans who insisted we follow this path.”

Rep. Peter King on House GOP: ‘I Honestly Don’t Know What They Want’

“He was the one that was the architect of this,” King said. “He said that if the House defunded Obamacare and shut down the government, then when it got to the Senate he would take care of it. He was behind the thirty or forty supporters in the House. He’s the one who assumed responsibility, and he’s responsible, also, for the failure.”