Peter King Clashes With GOP Rep. Over Shutdown Strategy: ‘This Never Had a Chance of Working’
VIDEO

Peter King Clashes With GOP Rep. Over Shutdown Strategy: ‘This Never Had a Chance of Working’ 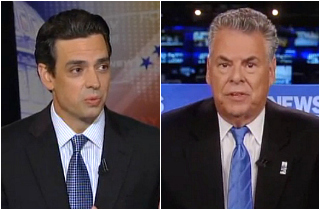 Representative Peter King (R-NY) clashed with Representative Tom Graves (R-GA) on Fox News Sunday over the strategy behind tying the defunding or delaying of ObamaCare to the continuing resolution, a tactic that has resulted in a government shutdown. King has argued strongly that the GOP faction behind this strategy, which includes Graves, was leading Republicans off a cliff.

“I’m talking about Ted Cruz (R-TX), who basically was saying that he could mange to both keep the government open and defund ObamaCare,” King said of his previous criticism. “The fact is, it was done in the House, the government is now shutdown and ObamaCare is going forward. This was a strategy that never would have worked. It was almost nullification, saying we’re going to shut down the government to defund a law we don’t like. If we want to defund something, we should repeal it, and do it the same way the president got it signed: elect Republicans to both houses of Congress, repeal it, and have a Republican president sign it.”

“There may be disagreement over strategy or tactics, but we are fully united behind opening the government up as quickly as we can,” Graves responded. “And we’ve been pretty reasonable as we’ve worked through this process.”

“We are the ones who shut the government down,” King said. “Charles Krauthammer called it the suicide caucus, the Wall Street Journal said they were kamikazes. You don’t take the dramatic steps of shutting down the government unless you have a real strategy and it has a chance of working. This has never had a chance of working. We’re now almost pushing ObamaCare to the side, and we’re talking about other issues, people are still out of work, and the government is still shut down.”

“Still, as he indicated, we are unified behind keeping the government open,” Graves responded. “As a conference, we have never been more united.”