Peter King to Fox: Obama Has Right to Attack Syria Without Congress 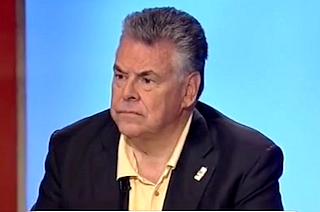 “Presidents have done that consistently,” King said, citing Ronald Reagan’s actions in Grenada and Bill Clinton’s in Kosovo. “Now, if he’s smart, [Obama] would certainly consult with the House and Senate leaders, with the top people on the Intelligence Committee, the Armed Services Committee, the Foreign Affairs Committee. But he doesn’t have to. As the Commander in Chief I believe strongly the president has the constitutional right to carry this out.”

Host Bill Hemmer quoted Obama’s statement as a Senator, in which he explicitly stated that a president does not have the right to leapfrog Congress if there is no pressing threat to the United States.

“I have real problems with the way the president has handled this from the beginning,” King added. “I’m really not defending his policy. I’m saying he has the right to carry out the attack. Attacks have to be carried out. But there has to be an endgame. It can’t be just a one or two or three day feel-good thing so he can soothe his conscience.”