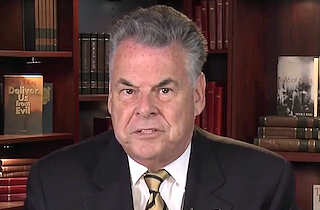 Congressman Steve King (R-NY) told Fox News Sunday afternoon he would not vote for another resolution to delay or defund ObamaCare if it meant shutting the government down, and that he was infuriated with Senator Ted Cruz (R-TX) for letting the fight get to a stage at which the government was threatened.

“We have too many people in our party, it’s a minority, who are following Ted Cruz, and they are tying up the entire Republican party,” King said. “The overwhelming majority of House members would vote to keep the government open. I’m tired of having Ted Cruz call the shots for the House Republicans.”

King said he thought the GOP could have won a more moderated battle.

“We should have been negotiating for the last several weeks on changes we wanted to make to ObamaCare, like in the medical device tax,” King said. “I think we could have gotten that approved, if that had been part of a negotiation.

“But because of Ted Cruz, it was all or nothing. It was either defund ObamaCare or shut the government down and we were locked into that. Now we’re into the final 36 hours, and we have people in our party who live in their own echo chamber. They think everyone wants this done. The fact is, most people, like in my district, are totally opposed to ObamaCare but they don’t want the government shut down. We have to show we can be a governing party and not just responding to small factions.”