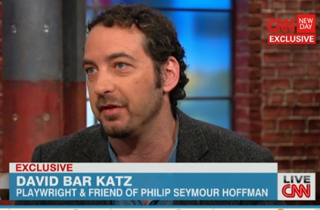 Yesterday, playwright David Bar Katz reached a very large settlement with the National Enquirer after the tabloid falsely claimed that not only was he the gay lover of his close friend Philip Seymour Hoffman, but that they’d both done heroin, he’d watched Hoffman freebase cocaine, and that the stress of his affair with Katz pushed the actor to relapse, leading to his recent death.

“I always knew that they made stuff up, but I never knew that they even made up having an interview with someone that they never had, and the degree of seeing how everyone picks it up, and treats it like news,” he said. “It’s lousy journalism, you know, like a fourth grader did something like for the school newspaper, I’d reprimand them, so I don’t know how they can purport to be journalists and function like that.”

Though the size of the settlement is unknown, it’s apparently large enough for Katz to start a foundation that gives out an annual prize of $45,000 to unknown playwrights. As his lawyer told the New York Daily News, “the size of the payment will allow us to give these grants for many years to come.”