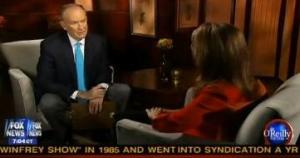 Bill O’Reilly finally got a chance to interview Sarah Palin after saying she was being kept off his show during the 2008 campaign. First order of business was figuring out why that happened.

And what was revealed was Palin personally called O’Reilly at home in October 2008.

Here’s the exchange at the beginning of the interview:

O’Reilly: A phone call you actually made to me to my house, late October 2008, we’d been trying to get you on The Factor for months. Do you remember that?
Palin: I do, shhh, that was part of that ‘going rogue’ stuff no one was supposed to know about in the campaign.
O’Reilly: So you’re going rogue calling O’Reilly, but you basically said to me ‘I want to do the show,’ but why didn’t you?

There’s a lot of “Going Rogue” mentions during Sarah Palin Week, but this sounds legitimately rogue-like. To call a media figure for what sounded like, at the time, an off-the-record admission that she wanted to go on his show but was being vetoed, is a new wrinkle in the Palin Chronicles.

Now that she has no obligations to the McCain campaign (or, really, the state of Alaska), she’s free to go on any program she pleases. And as we suspected, this was her hardest-hitting interview during this press push. While Barbara Walters was constrained by objectivity, O’Reilly was free to be harsh and opinionated. When Palin said, as she had several times this week, that she didn’t want to voice her campaign concerns to Sen. John McCain, O’Reilly jumped in. “Wait wait wait, you were frustrated and you’re not seeing their vision, don’t you think you should have gone to the presidential candidate and said, ‘Hey, they’re mismanaging me, you’ve got to let me loose’?” he asked.

Later, the conversation turned the iconic media moment of the campaign. “Katie Couric asked you an easy question and you booted it, Governor,” O’Reilly said bluntly. “Why did you boot it? If somebody asked what do you read, I’d say New York Times, Wall Street Journal, Washington Post I can reel them off in my sleep. You couldn’t do it?”