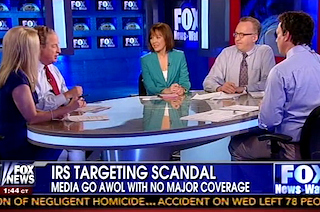 On Saturday afternoon, the Fox News Watch panel debated whether the media had ceased covering the IRS scandal because they were in league with Barack Obama when he called it “phony” last week, or because scandals in general have been so overhyped that the IRS’ activities have been drowned out.

“I wonder if there is a problem with labeling things as scandals when maybe they’re not scandals,” guest host Rick Folbaum said. “I think that everybody has sort of gotten scandal fatigue over the years, so they question: ‘Well, okay, you’re calling it a scandal. But you’re a politician, so of course you’re going to call it a scandal!'”

“In the previous segment we said the media were flat on the president’s speech in Galesburg,” Jim Pinkerton said. “The one part they did pick up on reliably was the part about the ‘phony scandal.’ I think the media said, ‘That’s our excuse now. We’re with President Obama and Jay Carney. Nothing to see here. Media caravan moves on.'”

“Here’s how you know that this is an authentic scandal,” Monica Crowley said. “Article II of the articles of impeachment against Richard Nixon was just the simple fact that he talked about and suggested the potential use of the IRS against one or two political opponents. In this case, the IRS was actually used—not just in an elite versus an elite way, Richard Nixon or Lyndon Johnson and the Kennedys, versus one or two elites opposed to them—but the IRS was used against broad sections of society. That’s what makes this potentially the most dangerous scandal in the U.S. history.”

“We had Richard Nixon actually involved in a coverup,” Miller said. “There has been no suggestion—”

“The article of impeachment against Nixon was merely that he suggested, not that he went through it with it, it never happened,” Crowley responded. “In this case it happened.”

“But you can’t say that with respect to Obama,” Miller said.

Folbaum agreed. “President Obama himself has not yet been linked to any of this,” he said.