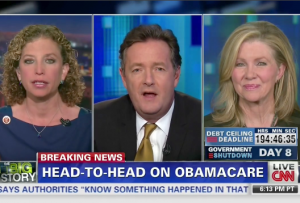 Piers Morgan brought on two members of Congress Tuesday night to try and hash out the government shutdown once and for all, but after listening to Congresswomen Debbie Wasserman-Schultz and Marsha Blackburn fight over the shutdown and budget negotiations, he grew steadily more frustrated and said this is why people hate Washington right now.

Morgan was very unhappy with President Obama‘s press conference, saying, “Nothing actually happened, nothing was achieved, all he did was inform us why nothing’s happening!” He blamed both sides for this mess, asking, “What is the matter with them?”

Wasserman-Schultz argued this is mostly the Republicans’ fault, but Morgan didn’t let that slide.

“There comes a point, if you’re the president of the United States, and it’s your government that shuts down, you’ve got to be the big guy!”

After Wasserman-Schultz pushed back for a bit, Morgan interrupted, “You’re turning into President Obama with his monologues.” He told Blackburn he believes the GOP is more to blame for the shutdown, to which she remarked, “As I expect you’d do.”

Morgan brought up the “utter catastrophe” that would unfold if the United States defaults on its debt and asked why Congress just can’t deal with all of this at once. Wasserman-Schultz and Blackburn talked about things they agree on, including how to fix government spending levels. They ended up arguing for a while until Morgan interrupted to say this is exactly why people find Washington so utterly frustrating.