Piers, Don Lemon, and Panel Opine on Alec Baldwin, ‘Fag,’ the N-Word and Other Naughty Words 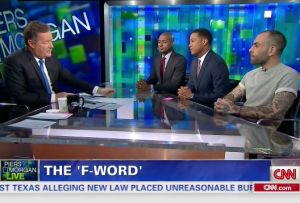 Piers Morgan conducted a lively discussion on Tuesday night over Alec Baldwin‘s homophobic remarks and, more importantly, the appropriateness of the word “fag” and whether it is only appropriate for gay people to say to each other or whether anyone at all should be able to say it at any time. Don Lemon, having conducted similarly intense debates of his own on the n-word, admitted that he’s been called that word before and doesn’t let it get to him that much.

They first tackled the n-word, with Lemon saying “you shouldn’t use that word like a pronoun” and Charles Blow admitting his conflicting feelings on the use of that particular word, even when used among young black youths. Lemon pointed out that it’s not just black youths, but also young white people who feel it’s okay to use that word.

He asked why gay men would want to use a phrase that’s been used to denigrate them. Michaelson said it’s about “reclaiming language,” while Lemon admitted that the word does not offend him because “if that’s the first and last thing that you can reach, then I’ve already won the argument.”

Morgan questioned whether Baldwin is really homophobic or just too “angry and defensive.” Blow attributed this to unconscious bias, and said that despite Baldwin saying in the past he understands when he’s gone too far, “When you get it, you don’t continue to do it.”