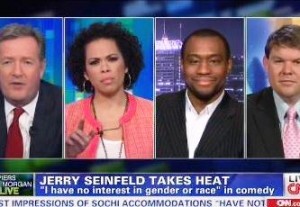 Piers Morgan found himself Wednesday night in complete agreement with Jerry Seinfeld‘s recent remarks that rather than being fixated on racial or gender diversity in comedy, his number one concern is finding people who are funny. Morgan and conservative guest Ben Ferguson battled Marc Lamont Hill and The Blaze’s Amy Holmes over the issue of whether forced diversity is necessarily “anti-comedy,” as Seinfeld put it.

Hill argued that Seinfeld’s “relying on a corrupted assumption,” that affirmative action and making a field more diverse means bringing in untalented people of different races when, in fact, it’s all about giving talented minorities a chance to be in the big leagues and impress people with their talents. Morgan insisted that it’s still a bad precedent for what’s supposed to be a free-wheeling, creative field.

“If you sit down with your American pie chart of cultural diversity in the country and divide up your humor quota for the show in a very specific, scientific PC-pleasing way, I got his point that in the end, you’re drifting away from what humor should be, which is spontaneous funny stuff.”

Holmes pointed out that humor comes from different cultural perspectives, ones that Seinfeld might not be personally aware of, while Ferguson rolled his eyes and said “not everything has to come down to race.” Morgan added that there shouldn’t be this “compelling pressure of ‘you must be diverse in this manner.'”