Piers Morgan And Ben Ferguson Battle Over Rights For Boston ‘Terrorist’: ‘This Is Not A Normal American’ 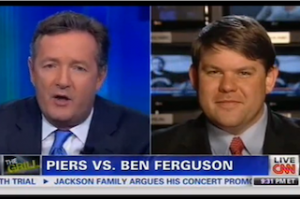 Conservative radio host Ben Ferguson became Piers Morgan‘s first target in a new segment called “The Grill,” during which, you guessed it, Morgan “grills” his guest on a topic of his choice. For the inaugural round Monday night, Morgan battled Ferguson over what rights should be afforded to Boston bombing suspect Dzhokhar Tsarnaev. Ferguson argued that the suspect should have been treated as an “enemy combatant” so authorities could question him indefinitely about his possible ties to foreign terrorist organizations.

“This is not a normal American,” Ferguson told Morgan. “This is not a random act of craziness. This is a planned, orchestrated terrorist attack against American citizens and more importantly than that, he probably knows a lot more about other things that could be going on and other things that could take American lives. That’s why you don’t read him his Miranda rights.”

Morgan shot back that Ferguson was making a lot of “suppositions” in his argument, using a lot of “probably’s” and the reality is the suspect is “an American citizen who committed a crime on American soil, and he’s entitled to his rights under the Constitution.” Morgan pointed out that Ferguson, an outspoken supporter of gun rights, would be the “first person to jump up and down on me about attacking your Second Amendment rights. Isn’t he entitled to the very constitutional rights that you hold so dear?”

Ferguson continued to assert that Tsarnaev does not deserve the same rights because the crime is being classified as “terrorism” and there are signs that “the chaos is not ending with this guy,” suggesting that he could still be responsible for or have information about future attacks against Americans. Morgan, meanwhile, insisted that the suspect is “still entitled to the normal rights of any other American citizen. The moment you rip it up for him, you’ve got to rip it up for everybody.”

Morgan pushed the conversation back to guns once more, asking Ferguson why nobody “on the gun rights side” he tried to push the theory “the only way way to stop a bad guy with a bomb is a good guy with a bomb?” When Ferguson understandably dismissed that idea as absurd and dangerous, Morgan said, “it’s precisely the argument the NRA always uses,” after Sandy Hook and other mass shootings. If citizens firing their own guns at mass shooters would work, why not throw our own homemade bombs at terrorists?