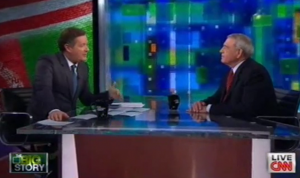 Piers Morgan sat down with Dan Rather on Tuesday night, discussing President Obama‘s record — and particularly his foreign policy, in light of his visit to Afghanistan. Both admired the president’s accomplishments, with Rather saying he deserves credit for the Osama bin Laden raid (and Morgan questioning why some aren’t doing just that).

Morgan asked Rather whether he’s impressed by the president’s record abroad — to which Rather replied, yes, he is. “I think most of the American people are impressed,” he said, adding that everything wasn’t perfect, but he did end the war in Iraq. Noting foreign policy might help Obama, Rather conceded that economy and jobs are the deciding factors in elections.

“I do feel it slightly churlish for people to criticize President Obama,” Morgan said, because if it had gone wrong, “all hell would have broken loose.”

“I do think the president, whether you agree with him or not, you have to give him credit,” Rather said. “On his watch he made the risky call.” Had the raid failed, he said, Obama likely would have sealed his fate as a one-term president.

He continued: “It’s also a reminder in the great sweep of history that it’s hard to judge presidential decisions and administrations at the time. It takes a period past the presidency to put it in context.” As an example, he cited President Eisenhower and the Korean War — and those who criticized him for ending it.

“Whether Republican or Democrat, we need to remind ourselves what a difficult job it is,” Rather said. “And making a call when your advisers, when the majority of your advisers said, I don’t think this is the time to go. To say, we’re going to go, make the call.”