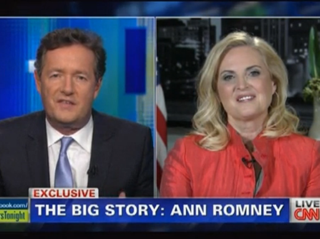 Ann Romney, widely considered to be one of the strongest cards up Mitt Romney‘s campaign sleeve, sat down with Piers Morgan tonight to answer all sorts of questions on the campaign trail, the recent events (good and bad) the Romney campaign has had to deal with. Ann Romney told Morgan the campaign was thrilled to hear of Jeb Bush‘s endorsement today, didn’t think social issues were as important as economic ones, expressed frustration at Etch-a-Sketch mania and admitted she laughed at Robert De Niro‘s allegedly offensive joke.

To the attacks that Morgan noted had been leveled at Republicans as being against the interests of women, Romney replied that the women she met on the campaign trail were “generally generous” and “very frustrated that they’re thinking that… their children are not going to be better off, and it’s because of the overspending.” “When I hear all the talk about social issues, I think– this is not what I’m hearing out on trail, it’s an economic message I’m hearing,” she noted, concluded the social issues weren’t as important to female voters as the media may make them seem. As for the Jeb Bush endorsement, she found it “very significant” and surprising. “Jeb just called Mitt on his cell phone,” she noted, “we didn’t have any heads up at all.”

“How is your etching and sketching going?” Morgan asked then, to which Romney laughed, having just say today was a “huge day” for the Romney campaign before being asked. “This is exactly what happens in a campaign when you get these distractions,” she argued, defending the comment as referring to “change we’re going to do in terms of organization.” “It makes for great media moments,” she admitted, but was generally not important. Morgan also asked about De Niro’s joke, asking whether America “was ready for a white First Lady.” “I laughed. I took it for what it was, a joke. We take everything so seriously, we have to be so correct,” she lamented, warning De Niro, “in politics, the fastest way to get in trouble is make a joke.”