Piers Morgan Asks Bill Clinton Whether Romney Is ‘Principled:’ ‘That’s Not The Issue To Me’
Video

Piers Morgan Asks Bill Clinton Whether Romney Is ‘Principled:’ ‘That’s Not The Issue To Me’ 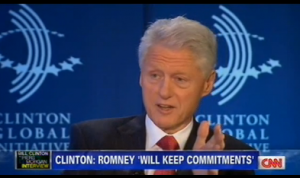 CNN’s Piers Morgan sat down with former president Bill Clinton on Tuesday. When asked what advice he’d have for Mitt Romney, Clinton replied that it is “crucial” for Romney to perform well in upcoming debates, and noted that he has to be careful about doubling down on his “47 percent” remark.

When asked if he felt Romney was “principled,” Clinton responded that “that’s not the issue to me,” adding that “I think he’s principled in the sense that he will keep the commitments that he has made.”

Morgan then asked how it is that Obama has been able to avoid facing “public retribution” for not doing a better job with the economy, with Clinton responding that there was only so much that could be done within four years’ time.

And here’s Clinton discussing term limits — including a fun fact about Arkansas: